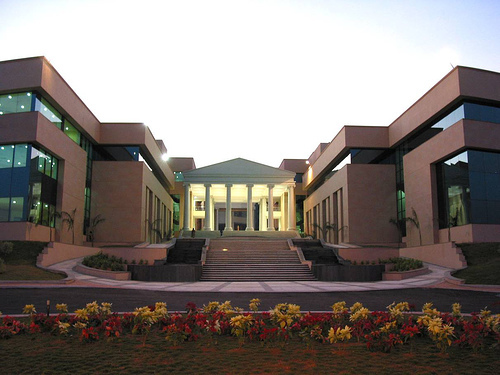 As a result of the learning, I developed a small and simple desktop app called “Process Killer” which somehow went viral in the entire training center. It was finally declared illegal when a few trainees apparently used it for cheating in the exams (it was not meant to do that, some people are really smart). It was unexpected, though it was a success of my learning.

So, we completed the generic training and got into intermediate stage. By now, we lost a few classmates who could not clear the exams and were shifted to new batches. The complexity of the course was increasing with every day and the module tests every now and then were enough to thrill us.

In between, we tried to find some time to watch the movies showcased in multiplex on weekends and to take a round of Mysore city. It was a strange feeling, we were enjoying the life but were too worried about the training, study.

Infosys Mysore campus is a happening place where you can find events going on anyday anywhere in the campus. They may be some festival celebrations, any particular unit specific fun activities, cricket, football etc. matches, awareness camps etc.

With increasing number of interns in the campus, bushes also became happening places and one could find security guards more alert and ready to catch the culprits all the time.

With all this fun and worry, intermediate stage was completed. It was the time when streams were allocated to us. It was purely a luck based game and they did not have a process to fit people to a stream according to their interest and capability. I was lucky enough to get the stream I wanted: Dot NET.

Again, the shuffling of people and due to very small number of people who got Dot NET in my intermediate section, I hardly knew more than a few people in my stream class. Though, it again gave me an opportunity to make new friends.

The training material for stream training was remarkable and I learnt a lot from it. As a result of the learning, I developed a small and simple desktop app called “Process Killer” which somehow went viral in the entire training center. It was finally declared illegal when a few trainees apparently used it for cheating in the exams (it was not meant to do that, some people are really smart). It was unexpected, though it was a success of my learning.

Stream training spanned little more than a month and once we were done with the final exam (compre), we were jumping with joy like a monkey rescued from a cage.

Training was over. It was time for getting posted to a Development Center. Infy has build some of the most beautiful campuses in the world. However, they are at some of the most unfavorable locations. But, we could not choose our location. Again, luck came to my rescue, and I got posted in Mysore itself. I was relieved as I did not want to go to one of the extreme locations which most of my batchmates got. But it came at a cost. I, with one of my college friends, was alone in Mysore campus and we could not do anything about it. Posting locations were written on stone, at least according to the HR. (Fortunately, we both got transferred to Hyderabad after 7 months).

When I completed my training, my heart was filled with joy, inspiration at its heights and a new spirit in my blood to win the world with my newly developed skills. Little did I know that it was all going to get wasted. Production life was not what was projected during training (This can be a topic of some future post).

So, overall, Infosys Mysore Training was an awesome experience which is hard to forget. The most important part is that I got a chance to meet so many good people who are now friends for life. I also enjoyed a great lifestyle. And of course, the knowledge I gained is indispensable.

This post completes the three part series Infosys Mysore Training: A Walk to Cherish for Life. If you want to know more about my experiences, I am always here to answer your queries.