This reminds me of the range anxiety of smartphone batteries we had just a few years ago. While traveling, we were always worried about whether our smartphone battery would discharge before we reached home or if we would find a charging slot on the way.

Suddenly the technology started to evolve. High-capacity batteries became financially viable. And the massive scale achieved due to high demand reinforced the innovation.

It started with the emergence of power banks which proved very useful for some time. But they were a part of the evolution soon replaced by even better technology.

As a result of that demand-led innovation, today, in just a few years, we have 120-watt mobile chargers compared to 5-watt chargers just a few years back. This has drastically reduced the charging time.

And the battery capacity has increased enough to ensure that our mobile phones work for days on a single charge, even with heavy usage.

We do not worry about battery capacity of mobile phones anymore. The range anxiety is gone as if it was never an issue.

I know it is not exactly an apples-to-apples comparison, but it does give us a good perspective on the possible future of electric cars. It may seem far-fetched and improbable today, but we never know if it is just the beginning of another era of demand-led innovation. 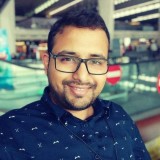 Abhineet is IIM Alumnus and Founder of popular Digital Publishing Platform, Sahityapedia. He is a technology enthusiast by hobby & an avid reader.